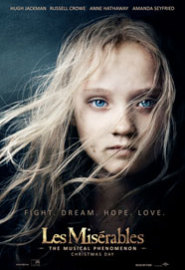 Becky and I went to see the new movie Les Miserables at the AMC theaters in Castle Rock, CO last night.  The MovieFone website at Les Miserables describes the movie as follows…

“Les Miserables is the motion-picture adaptation of the beloved global stage sensation seen by more than 60 million people in 42 countries and in 21 languages around the globe and still breaking box-office records everywhere in its 27th year. Helmed by ‘The King’s Speech”s Academy Award-winning director, Tom Hooper, the production stars Hugh Jackman, Oscar winner Russell Crowe, Anne Hathaway and Eddie Redmayne.

The Review: Les Miserables is based on a classic novel and award winning Broadway show.  It is a story of redemption, along with the wickedness of men, that is set in the 1800’s during the French Revolution.  I was actually looking forward to seeing this film, even though it was a musical and I’m typically not a huge fan of musicals.  I saw the one back in 1998 starring Liam Neeson , Geoffrey Rush and Uma Thurman, which was a great flick.  The movie is getting great reviews from fans and I’m assuming most of them have seen the Broadway musical, so they are probably loving this unique adaptation for the Big Screen.

Becky and I didn’t like it at all.  We thought it was a complete waste of time.  Sure, the story is fantastic, the acting is really incredible and it’s a classic story, but sitting for almost three hours listening to people sing every line in the movie?  Come on!  I tried to fall asleep a few times because I was bored to tears.  There was no real dialogue in this movie at all, they sang everything and it was annoying.  It’s one thing to have a musical like Grease or Mamma Mia, where they break into song while you’re watching the story unfold, but to be transported into another world where people only sing everything they say, was just too much to endure.

Becky leaned over to me after two hours and said, “Pretend like you paid $150 in New York to watch this on Broadway.”  I said, “I would have left after two hours there too.  I would rather be home watching a Bowl game than sitting through this movie.”.  When it was finally over, I walked out of the theater and broke into song.  “Becky, do you know where our car is?  I do not remember where I parked.  I’m sure it’s very cold, it is so cold and I will need to turn on our butt warmers!” (singing)  She laughed and I said, “And I can’t talk you into seeing The Hobbit, after we just endured three hours of that miserable film?”  She said, “No.”

Well, I’m glad we didn’t pay to bring the kids to this one.  So, unless you’re really into Broadway musicals our advice is to skip this one all together.