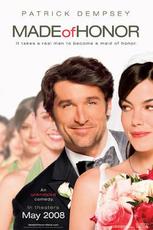 Becky and I went to see Made of Honor at the AMC theaters in Highlands Ranch, Colorado last night. The Fandango website at Made of Honor describes the movie as follows:

“For Tom (Patrick Dempsey), life is good: he’s sexy, successful, has great luck with the ladies, and knows he can always rely on Hannah (Michelle Monaghan), his delightful best friend and the one constant in his life. It’s the perfect setup until Hannah goes overseas to Scotland on a six-week business trip… and Tom is stunned to realize how empty his life is without her. He resolves that when she gets back, he’ll ask Hannah to marry him — but is floored when he learns that she has become engaged to a handsome and wealthy Scotsman and plans to move overseas. When Hannah asks Tom to be her “maid” of honor, he reluctantly agrees to fill the role… but only so he can attempt to woo Hannah and stop the wedding before it’s too late.”

The Review
Made of Honor is a total chic’ flick and what is essentially a remake of My Best Friend’s Wedding with a different cast of characters and a new setting, only with a guy as the Maid of Honor trying to steal the bride instead of a woman trying to steal the groom. It’s a cute film that is targeted to women, I think 80% of the audience on Friday night were women.

Becky and I both liked this film. It was fun and lighthearted, but very predictable. Becky liked it more than I did. I would rate is as a Rental and she thought it was Worth The Trip. It’s a great date movie and there was a moral to the story about the fact that falling in love has more to do with just infatuation, but compatibility with a best friend. Which is why it was so much like My Best Friend’s Wedding.

The acting and directing were well done though and it was entertaining, but I would definitely wait for the rental rack.
John – ** Rental
Becky – *** Worth The Trip