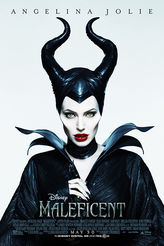 Becky and I went to see Maleficent last week at the Regal theaters in Lone Tree, CO last week.  The MovieFone website at Maleficent describes the movie as follows…

“As a beautiful young woman of pure heart, Maleficent (Angelina Jolie) has an idyllic life in a forest kingdom. When an invading army threatens the land, Maleficent rises up to become its fiercest protector. However, a terrible betrayal hardens her heart and twists her into a creature bent on revenge. She engages in an epic battle with the invading king’s successor, then curses his newborn daughter, Aurora — realizing only later that the child holds the key to peace in the kingdom.”

The Review:  Maleficent is a great Disney story that has a cast of strange characters in a fantasy world.  The acting by Jolie is really good and she plays this evil character extremely well.  The graphics and overall feeling of the movie is very good and it is definitely entertaining.  The story will keep your interest with a twist to the Sleeping Beauty story as it focuses on the life of the evil queen as the center of this film.  What made her go from being a happy fairy to becoming the evil queen is answered in the movie and how it’s put together is very clever.

The biggest complaint that we all had about this movie is that it’s just a little too “Disney”.  Disney can make some good films, but all too often they want to make it so that a five year old can go to their movies.  So in an effort to try to appeal to every age audience they make it a little too childlike, instead of doing it more like a Pirates of the Caribbean that was more of a PG-13 film.  They made this movie too friendly and Maleficent is not as evil as you would expect her to be, but it’s still a good movie.

We both liked it and found it entertaining, but some of the kids liked it more than others.  Conroy thought it was pretty good, but he and I thought it would be better.  Corban didn’t like it that much and Bianca loved it.  It’s definitely a kids movie more than an adult film.