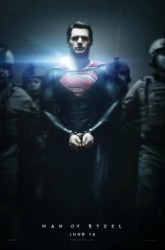 Becky and I went to see Man of Steel on opening week with Corban and Bianca at the AMC Theater in Castle Rock, CO. The MovieFone website at Man of Steel describes the movie as follows…

”Superman flies back onto the big screen in this Warner Bros./Legendary Pictures production directed by Zack Snyder (Watchmen), produced by Christopher Nolan (The Dark Knight), and featuring a screenplay by David Goyer (Blade, The Dark Knight)…”

The Review:  Man of Steel is one of those films that you’re going to really like or really dislike.  I had really been waiting for this one to see it and I really thought it would be an amazing movie.  After all, it’s Superman!  Corban and I liked the movie, but it wasn’t amazing as I was hoping it would be.

I have always enjoyed seeing Superman where he is Clark Kent, mild mannered reporter for the Daily Planet, with his hidden identity fighting crime and saving people, including Lois Lane, but this was too much like the Avengers where aliens have arrived to destroy the planet again.  We’ve been there and done that far too many times from the latest Star Trek to The Avengers to IronMan and Thor.  After a while, global annihilation from anti-superheros gets a bit worn down and the comic books are much more original than the movie scripts seem to be.

The movie is way too long and the story is okay, but at times we were all hoping that it just would end because of some of the flaws in the movie.  The evil characters are just as powerful as Superman, which didn’t make a great deal of sense since he had been on Earth his whole life and they just arrived.  You had to really read into the film that Superman was actually stronger because he had been on Earth longer and gained his incredible strength from the Sun, but it took almost the entire movie to figure that out.  The climactic ending was less than climactic, but if you like Superman you should still like the movie. It is as if Hollywood is gearing all of us up from some visit by superhero aliens in the future that will really be fallen angels, but that’s another topic all together.

Becky and Bianca didn’t like this movie at all.  Becky described it as “painful” when I asked her how she liked it.  It was too long, it was too boring, it was watching Superman throw his enemy into too many buildings and the list went on and on.  Corban and I still liked it, even with the shortcomings, but it wasn’t nearly as good as it could have been.  I wouldn’t bother seeing this unless you’re a Superman fan and I spoke with one Superman fan who loved it and had already seen it three times.