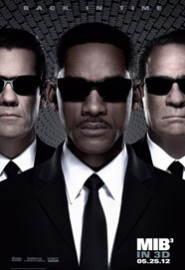 “In Men in Black 3, Agents J (Will Smith) and K (Tommy Lee Jones) are back… in time. J has seen some inexplicable things in his 15 years with the Men in Black, but nothing, not even aliens, perplexes him as much as his wry, reticent partner…”

The Review
MIB 3 is the third installment of the Men in Black series with Will Smith and Tommy Lee Jones as Agent J and Agent K fighting aliens in their top secret Men in Black organization.  This time around, Will’s character, Agent J, has to go back in time to prevent the planet from being destroyed by the most wicked of aliens and prevent Agent K’s pre-mature death.

The film is much like the previous Men in Black movies, almost the same as all of them with crazy aliens, high-powered weapons and stopping a diabolical plan.  It’s still done very well and the acting is good and the story is fun.  Josh Brolin is fantastic in this movie, playing a younger Tommy Lee Jones and it’s uncanny much they looked alike.  It’s an entertaining movie for sure, but I think it’s probably worn out the MIB series now.

We all liked the movie and thought it was worth the price of admission, except for Becky who was bored with it, but she’s not a big Science Fiction fan anyway.  If you’re an MIB fan, you’ll like this flick, otherwise you might want to wait for the rental.  The kids had never seen any of the MIB’s before and they really liked this movie.