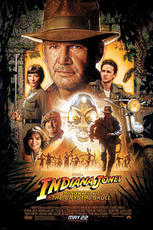 Becky and I took our kids to see the new Indiana Jones movie tonight at the Kerasotes theaters in Castle Rock, Colorado. The Fandango website at Indian Jones and the Kingdom of the Crystal Skull describes the movie as follows:

The Review
Okay, I’m behind the eight ball on writing movie reviews the past week. I haven’t written reviews yet for What Happens In Vegas, Flawless, the new Narnia movie or even the strange documentary Young@Heart Dumb and Dumberer: When Harry Met Lloyd rip , that Becky and I saw last week, but I had to write a review for the new Indiana Jones movie that we saw tonight.

I was a huge Indiana Jones fan as a kid and totally loved Raiders of the Lost Ark. I was also a big time Star Wars fan. I saw the original Star Wars in the movie theater 28 times as a kid. I skipped quite a few days of school to see that flick so many times, so it’s not that I don’t like George Lucas or his creativity. Unfortunately, after the first Indiana Jones film, George Lucas and Steven Spielberg proved to the world that they are terrible at creating movies together. Sorry Indiana Jones fans, but this movie you waited so long for is nothing short of ridiculous.

News flash to the billionaire writer and Director, nobody with half a brain is going to believe that Indiana Jones is a Super Hero as they have made him out to be, especially at Harrison’s age. Even with a magic egg shaped crystal head of an alien, you can’t take a boat of any kind over three giant water falls and live, and then get out of the water, brush yourself off and go fight with natives. By the way, five minutes later your clothes will not be dry. That kind of thing only happens in the last installment of Pirates of the Caribbean.

Isn’t the job of a Director to notice things like this? I think Spielberg was taking a nap when he did this film. Go see Iron Man instead, who is a real Super Hero character, with a much better Directing job and vastly superior action scenes.

This new Indiana Jones movie is absurd, boring and too long for as ridiculous as they made it out to be. I thought I was watching The Temple of Doom all over again, which also sucked. The only thing believable about this movie was Harrison Ford’s gray hair. It is a completely silly and goofy flick with space aliens right out of the Star Wars bar scene that looked like the big headed alien from the Alien movie. The familiar theme song, Indy’s hat and his famous whip just can’t carry this movie.

In fairness, our boy Corban, who is 8 years old really loved it and so did our 10 year old, so they’ve made a PG-13 movie that can only be appreciated by kids 10 and under. It’s about as believable as SpongeBob Squarepants. Becky thought it was a rental and Bianca who is 7 years old said she liked the “one with the Ark” much better. I can’t recommend this movie on the big screen. There are way better movies out there right now to spend your money on.

This film is definitely a one time Rental in our book.