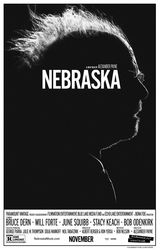 Becky and I went to see Nebraska last week at the Regal Cinema Greenwood Village, CO. The Fandango website at Nebraska describes the movie as follows…

“Cantankerous old buzzard Woody Grant (Bruce Dern) can barely walk down the street of his home in Billings, Mont., without stopping for a drink. So when Woody receives receives a sweepstakes notice in the mail and insists on making a 750-mile trip to Lincoln, Neb., to collect his prize, it falls to baffled son David (Will Forte) to accompany him. During a stop in their Nebraska hometown, word gets out about Woody’s fortune, first making him a hero, then later, the target of predatory people..”

The Review: Becky and I had pretty much seen everything else at the movies and decided to go and catch this film because we heard how great it was.  We arrived in the theater and it was pretty packed, but we had no clue what we were in for with this movie.  It was in black and white, which we got used to after about 10 minutes into the movie, but it needed to be in black and white because the film didn’t have anything to offer.

This was one of the worst movies that we’ve seen in quite a while.  The acting was fantastic, but it’s a story of some old guy who thinks that he’s won a Sweepstakes and he’s bound and determined to go to Lincoln, Nebraska to get his winnings.  His son goes along with him, who hasn’t really done much with his life and they have a really rocky relationship because of his childhood and his Father being an alcoholic.  The son learns some things about his Dad and there are some touching moments, along with a few funny moments.  I didn’t think that we were paying to see a Rated R, Hallmark television movie in black and white that was about as interesting and exciting to watch as watching paint dry.

I am trying to figure out why so many people liked this movie?  It was depressing, boring, a waste of time and really stupid.  It reminded me of taking a trip to a small town in Iowa or Nebraska with some old guy to visit his relatives, making a video about it that you could post on Youtube and then charge people to go see it?  I guess people have become so shallow and starved for any sense of reality that they think this is entertainment?

I would say this movie is a Don’t Bother and Becky thought it was a Rental at best.  The popcorn at the Regal Cinemas is really good.