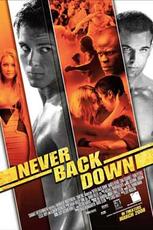 Becky and I went to see Never Back Down at the Kerasotes theaters in Castle Rock, Colorado last week. The Fandango website at Never Back Down describes the movie as follows:

“Jake Tyler (Sean Faris) is the new kid in town with a troubled past. He was a star athlete on the football team at home, but in this new city he is an outsider with a reputation for being a quick tempered brawler. After he is unwittingly pulled into a fight, defeated and humiliated, a classmate introduces him to the sport of Mixed Martial Arts (MMA). It is immediately apparent to Jake that MMA is not street fighting but rather an art form he wants to master, and he soon finds his mentor in Jean Roqua (Djimon Hounsou), who takes Jake under his wing.”

The Review
Never Back Down is a great flick. It’s a bit like an updated version of The Karate Kid with Ultimate Fighting. There are a bunch of no name actors in it, except for the dude from Gladiator (Djimon Hounsou). It’s a teen movie, but it’s done very well with plenty of action and excitement.

The story is really good. There is a good moral to the story and Becky and it’s pretty clean and well done. Becky and I both liked it and thought it was worth the trip. You should enjoy this one if you see it at the theaters or at home.

in Denver, Colorado. He can help you save time and money on any make or model, new or used, lease or purchase – nationwide! Call or email John about your next vehicle! jboyd@coolcarguy.comCreepshow 2 download