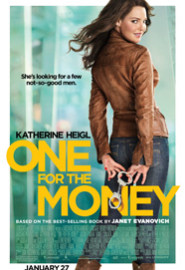 A proud, born-and-bred Jersey girl, Stephanie Plum’s got plenty of attitude, even if she’s been out of work for the last six months and just lost her car to a debt collector. Desperate for some fast cash, Stephanie turns to her last resort: convincing her sleazy cousin to give her a job at his bail bonding company…as a recovery agent…”

The Review
One for the Money is a classic chic’ flick that has Katherine Heigl as the main character.  She is also the Executive Producer of the film.  It’s not realistic, but it’s not supposed to be either.  It’s a romantic comedy and it’s pretty funny, but it has this action element to it that makes the film disjointed and silly at times.  It still works though.  Becky didn’t like this movie very much, she thought it was kind of boring.

I liked the movie more than she did and we took our daughter Bianca with us and she liked it too, but it was too adult for her.  It’s not going to win any awards, but it’s a cute film and entertaining.  The critics didn’t like this movie, so Becky was along with the movie critics this time around.  One problem with the movie was that Katherine Heigl wasn’t very good with her New Jersey accent.

Becky didn’t like it because she thought it was stupid, cheesy and low budget, so that sums up her review.  I thought it would make a for a good rental, but probably not worth the price of admission.