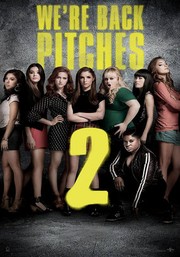 Becky and I went to see the new movie Pitch Perfect 2 last Friday at the AMC theater in Castle Rock, CO and our 13 year old daughter Bianca was there with her friends. The Fandango website at Pitch Perfect 2 describes the movie as follows…

“In this sequel to Pitch Perfect, the collegiate a cappella group called the Barden Bellas enter into an international competition, but they are told it will be impossible to win because they are from the U.S. The girls refuse to give up and vow to be the first Americans to take home the top prize. Directed by Elizabeth Banks, the film stars Anna Kendrick, Rebel Wilson, and Hailee Steinfeld. ~ Erin Demers, Rovi…”

The Review: First of all, Becky took me to two other movie theaters that were sold out to see this movie and when we got to Castle Rock it was sold out there as well, so we had to wait in line to see the film.  This is something we rarely have to do unless we are going to a sneak preview somewhere with free tickets.  I was just thinking to myself, and I posted on Facebook, that I had to stand in line to see Pitch Perfect 2 when Mad Max Fury Road was starting on the same night!  At any rate, we made it into the auditorium and I was among a room full of teenagers and Moms seeing this movie.  I think I was one of the only guys in the film, which I got since Mad Max was in another theater and I should have been there too.

This is a continuation of the first Pitch Perfect, which was a pretty funny movie.  If you didn’t see the first one you might want to watch that one first.  The story this time around wasn’t that great, but the music was good again.  The characters are well done, but there were too many characters in the background that really didn’t have much of a part in the film.  It was Directed by Elizabeth Banks, who also is a character in the movie, and she did a really good job directing the film and being in it at the same time.  There are some good jokes and cameo appearances by some expected people as well and they were good in the film.

Overall we really liked the movie and would have to rate it a Don’t Miss It even with some of the shortcomings of the story.  The acting is good, it’s funny and was entertaining.