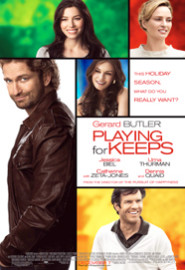 Becky and I went to see the new movie Playing For Keeps at the AMC Cinemas in Tucson, AZ last week when we were down running the Tucson Marathon.  The MovieFone website at Playing For Keeps describes the movie as follows…

“‘Gerard Butler, Jessica Biel, Uma Thurman, Catherine Zeta-Jones and Dennis Quaid star in ‘Playing For Keeps,’ a romantic comedy about a charming, down-on-his luck former soccer star (Butler) who returns home to put his life back together. Looking for a way to rebuild his relationship with his son, he gets roped into coaching the boy’s soccer team. But his attempts to finally become an “adult” are met with hilarious challenges from the attractive soccer moms who pursue him at every turn..”

The Review: Playing For Keeps is a love story starring Gerard Butler and Jessica Biel about a washed up famous soccer player who has former marriage problems, women problems and being an absentee Father.  He can’t seem to land a good job and his days of being a millionaire are long gone.  He can’t seem to get a break financially and then he decides to coach his son’s soccer game.

There are quite a few strange characters in this film, especially some of the “soccer Moms”, who are fascinated by this good looking former soccer star.  The story is pretty good, but it moves slow at times, while having some funny parts.  It does a good job of presenting how people’s priorities and chasing money can really get their lives out of whack.  The movie is really about the importance of having solid relationships with family.

I thought it was a pretty good film, it wasn’t great.  Becky and I both liked it because we have children, but it’s more of a rental than one to go see in the big screen.