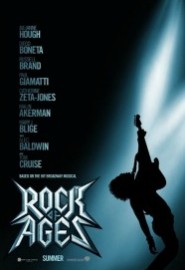 Becky and I went to see the new movie Rock of Ages yesterday at the AMC Theater in Castle Rock, CO.  The Moviefone website at Rock of Ages describes the movie as follows…

“A small-town girl and a big-city boy find their fates intersecting on the Sunset Strip, riding a wave of romance through the height of the “hair metal” scene as the off-Broadway musical rocks its way to the big screen courtesy of choreographer-turned-director Adam Shankman (A Walk to Remember, Hairspray). Arriving in Hollywood with stars in her eyes, Sherrie (Julianne Hough) meets Drew (Diego Boneta), and together they plunge headlong into the local rock scene. Meanwhile, as Sherrie struggles to stay afloat in a churning sea of rock ‘n’ roll excess, she gets swept off her feet by audacious rock star Stacee Jaxx (Tom Cruise). Russell Brand, Paul Giamatti, and Bryan Cranston co-star in a movie featuring music by Journey, Def Leppard, Poison, Whitesnake, Bon Jovi, Foreigner, Joan Jett, and REO Speedwagon...”

The Review
Rock of Ages is a wild musical that I had zero interest in seeing.  I’m not much of a fan of musicals, but Becky talked me into seeing it since it had music from the 80’s and she thought it looked good.

It turns out that Becky was right and I was wrong on this one.  As one guy coming out of the movie said, “I’m going to have to turn in my Man Card, after seeing that movie because I really liked it.”, which I thought was pretty funny.  The movie was good though and the music was great, if you’re a fan of 80’s music.  If you’re not a fan of 80’s music then you probably won’t like this film.

The movie has a pretty good story about a girl who goes to California in search of her dream of becoming a singer and she meets a guy who wants to be a rock star.  They both work at a famous night club that a zealous woman wants to get closed down, which makes for some funny scenes.  The characters in the movie are very funny and it’s really well done, but it does have quite a bit of sex, alcohol (instead of drugs) and rock and roll.  However, that’s what you would expect from this film.  Tom Cruise was really good in this movie, playing a successful rock star, even if you’re not a Tom Cruise fan.

It’s not going to be a film for everyone though for sure, but most of the people I spoke with after the movie really liked it.  I thought it was worth the price of admission and Becky rated it a Don’t Miss It.