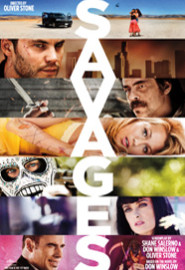 Becky and I went to see the new movie Savages last week at the AMC Theaters in Highlands Ranch, CO.  The Moviefone Website at Savages describes the movie as follows…

Laguna Beach entrepreneurs Ben (Johnson), a peaceful and charitable Buddhist, and his closest friend Chon (Kitsch), a former Navy SEAL and ex-mercenary, run a lucrative, homegrown industry–raising some of the best marijuana ever developed. They also share a one-of-a-kind love with the extraordinary beauty Ophelia (Lively). Life is idyllic in their Southern California town…until the Mexican Baja Cartel decides to move in and demands that the trio partners with them…”

The Review
Savages is a brutal action film about the Mexican Drug Cartel that is probably more true to life than we would all like to believe.  It deals with the issue that even if drugs are legalized, they can still be controlled and influenced by the criminal crime networks since they are willing to steal, kill and destroy to stay in business.

The movie is very graphic, with some very distorted and evil characters.  It reminded me of modern day Scarface with the Mexicans instead of the Columbians.  The blatant disregard for human life was very disturbing, along with the drugs, language, strange sexual content was a bit too much in this movie.  We saw it with our friends Mark and Maria and Mark liked it more than the rest of us.  The story was actually pretty interesting and the acting was good too, but these other elements wrecked the movie for us.

I’m going to have to rate it a Rental, borderline Don’t Bother and Becky definitely thought it was a Don’t Bother.