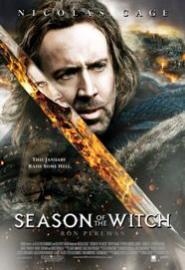 “‘Oscar winner Nicolas Cage (‘National Treasure‘, ‘Ghost Rider‘) and Ron Perlman (‘Hellboy‘, ‘Hellboy II’) star in this supernatural action adventure about a heroic Crusader and his fellow soldier who must transport a woman accused of being a witch to a remote monastery. The arduous journey across perilous terrain tests their strength and courage as they discover the girl’s secret and find themselves battling a terrifyingly powerful force that will determine the fate of the world…”

The Review
Season of the Witch is a movie about a couple of knights who have fought in numerous battles during the Crusades and lived to tell about it.  They become deserters after seeing the mission of “the Church” going in the wrong direction and killing innocent people in the name of God.  A plague has stricken the country and the two of them are commanded to take a young girl to a far away land for trial as a witch in order to end the plague.

The story is definitely different.  It’s not a great movie by any stretch, but it reminded us of Van Helsing, which was kind of “campy”, while being a scary movie at the same time.  It has that same kind of feel.

The movie critics hated this film, but then again they really liked Black Swan that we thought was lame.  I think the critics are being way too hard on this movie.  There are a few parts of the film that will make you jump and we all thought it was a fun movie.

It’s not scary, but the acting wasn’t bad and the story was different and entertaining. The ending is far fetched.  However, think Van Helsing and you’ll get about the same kind of film with different characters and a totally new storyline.