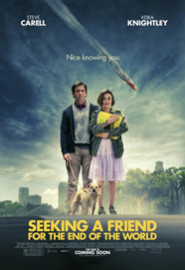 “Set in a too-near future where time at once stands still and is slipping away forever, the writer/director explores what people will do and how they will feel when humanity’s end is near. A 70-mile-wide asteroid is en route to Earth, and the last best attempt to counter it has failed. Also failing is the marriage of soft-spoken insurance salesman Dodge (Golden Globe Award winner Steve Carell); the breaking news that the world will end in an estimated 21 days cues his wife to leave him on the spot. Dodge is a man who has always played by the rules of life, while his neighbor Penny (Academy Award nominee Keira Knightley) is an extroverted woman who hasn’t…”

The Review
Seeking A Friend For The End Of The World is a movie I thought looked pretty good from the movie trailer, but Becky and Conroy went to see it instead.  They both said it was terrible and not worth seeing.  Becky was really looking forward to seeing this film.  It looked funny, but instead it turned out to be a bummer flick with a very goofy story that she said was depressing.

I guess I made the right move to skip this one, so you may want to do the same.  Conroy and Becky both said that it wasn’t even worth renting, so they really didn’t like it.