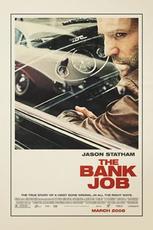 Becky and I went to see the new thriller The Bank Job at the AMC theaters in Highlands Ranch, Colorado on Friday. The Fandango website at The Bank Job

“A car dealer with a dodgy past and new family, Terry (Jason Statham) has always avoided major-league scams. But when Martine (Saffron Burrows), a beautiful model from his old neighborhood, offers him a lead on a foolproof bank hit on London’s Baker Street, Terry recognizes the opportunity of a lifetime. Martine targets a roomful of safe deposit boxes worth millions in cash and jewelry. But Terry and his crew don’t realize the boxes also contain a treasure trove of dirty secrets – secrets that will thrust them into a deadly web of corruption and illicit scandal that spans London’s criminal underworld, the highest echelons of the British government, and the Royal Family itself…the true story of a heist gone wrong…in all the right ways.”

The Review
The Bank Job is based on a true story about an amateur bank robbery that took place in the 1970’s. It was fast paced and kept our interest from start to finish. The film was done very well with the look and feel of London in the 1970’s and the acting was very good. It kind of reminded me of Ocean’s 11 with a crew of misfits that decided to rob a bank, only with much more realism and it was pretty entertaining.

The characters in the film were interesting and there were parts of it that were pretty funny, like when their hired “lookout” on the walkie talkie gets picked up by a Ham radio operator who calls the police. However, be aware that there is nudity and some serious graphic violence. The movie is definitely rated R, so not the best bet for kids.

Becky rated it as a Rental and I thought it was Worth The Trip.

Tune Into The Cool Car Guy Show Every Thursday 10AM – 11AM MST on Castle Rock Radio – CastleRockRadio.com