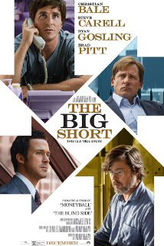 Becky and I went to see the movie The Big Short at the AMC theater in Hollywood, CA on Thursday with Conroy, Corban and Bianca. The Fandango website at The Big Short describes the movie as follows…

“This adaptation of Michael Lewis’ nonfiction book The Big Short explores the 2008 financial crisis through the lens of four unorthodox moneymen, who foresaw the consequences of the fraudulent mortgage-lending practices of large banks on Wall Street. Christian Bale plays Michael Burry, a former hedge-fund manager who was one of the first to forecast the collapse of the credit bubble due to excessive subprime lending. Steve Carell is Mark Baum (based on the real-life Steve Eisman), a money manager who rose to fame after successfully betting against subprime mortgages…”

The Review:  If you’ve been wondering what happened to bring about the big recession of 2008 and you’re curious about how incompetent the United States government and Wall Street investors really are, then you will want to see this movie.  It has an all-star cast and they all are excellent at playing a group of eccentric investors from California, Denver and New York City who all arrive at the same conclusion – the big banks were committing fraud and packaging bad loans as “A rated paper”, when it was really junk paper.

The movie has some comedy mixed in with this tragedy about American Capitalism when it is allowed to go unchecked by corrupt government officials.  If you lived through the 2008 recession when our two incompetent Presidents, George Bush followed by Barrack Obama, came out and said how we had to save the banks with a $700 billion bailout or we would all plummet into the Abyss then you will appreciate this film.   This was even though the banks had clearly committed fraud on the American people and the United States taxpayer got to flip the bill, while the bankers ran off with their millions.

The film is very well done and it is very entertaining as a look back to just 8 years ago when some investors realized that “credit default swaps” were being packaged and sold without telling the whole story of why money was flowing to people with bad credit to buy homes.  It reminded me of the Savings and Loan scandal that we went through in the 1980’s and 1990’s, which was another financial fiasco that the Federal Reserve helped create for the American people and this sort of thing will more than likely happen again as is shown clearly at the end of The Big Short.

Conroy and I thought it was a Don’t Miss It and Corban thought it was Worth The Trip.  If you don’t pay attention in this movie and you’re not sure about what happened in 2008 you can easily get lost or find the movie really boring.  Bianca and Becky thought it was a waste of time and they didn’t like it at all.