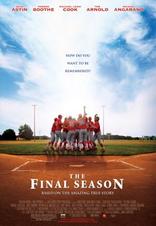 Becky and I took Corban and Bianca to see The Final Season last week at the AMC theaters in Highlands Ranch, Colorado. The Fandango website at The Final Season describes the movie as follows:

“Baseball rules in the small town of Norway, Iowa. Its high-school team is the winner of many state championships, and the coach, Jim Van Scoyoc (Powers Boothe), is National Coach of the Year. When Norway’s high school must merge with another, he loses his job. Kent Stock (Sean Astin), who once assisted him, takes over the Norway team for the last season, but the odds are against Kent and the players.”

The Review
The Final Season is a great family film that we all enjoyed, except for Bianca who didn’t like it as much as we did, but she still watched the whole thing. It’s a good clean film and really shows the demise of the small town in America as States look to put profits over people. It’s an underdog film for sure, but it’s done very well with solid acting and a great story.

It’s a pretty low budget flick that is probably going to hit the rental rack soon, so make sure you add it to your list of rentals when it becomes available. I liked it more than Becky did, but she definitely recommends it as a rental.