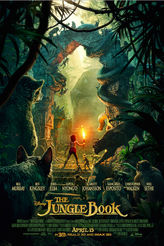 “In this reimagining of the classic collection of stories by Rudyard Kipling, directorJon Favreau uses visually stunning CGI to create the community of animals surrounding Mowgli (Neel Sethi), a human boy adopted by a pack of wolves. The appearance of a villainous tiger named Shere Khan (voiced byIdris Elba) forces Mowgli’s guardian, the panther Bagheera (Ben Kingsley), to shepherd the child to safety in the “man village.” Along the way, the boy meets an affable, lazy bear named Baloo…”

The Review:  The Jungle Book is a Disney remake of the classic cartoon that I grew up watching as a kid from the Rudyard Kpling classic.  It has the classic characters, including Mowgli and Bagheera the black panther and Baloo the lazy bear that are found in the cartoon, along with the snake that wants to eat him.  The movie though is different than the cartoon that is much more light hearted than this new rendition.  The animation is great in the movie that combines realism with the cartoons in much the same way that a Harry Potter or Lord of the Rings film can take a person into an imaginary world of Elves or Witches, this movie takes the audience into the jungle.  It’s very well done and the animals come to life.

However, it is a bit too serious of a movie in my opinion and loses a great deal of the light heartedness that makes the cartoon such an entertaining classic, in the same way as Winnie the Pooh or other childhood stories tend to be.  The movie tries to be too much of a good verses evil and the law of the jungle with man being the bad guy, which is probably closer to the book.  I just know that I liked the cartoon much better than this movie because of that aspect of the film.  The characters are good, the giant python Kaa doesn’t show up for very long in this film, but in the cartoon it has a much larger part as the Siberian Tiger is on its quest to find the boy.

Overall, this movie is entertaining and it will do well at the box office with the kids.  Becky didn’t like it as much as I did or Conroy and Bianca liked it enough that she saw it twice, if that tells you anything.