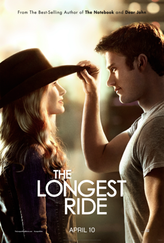 “Nicholas Sparks‘ best-selling novel comes to the big screen in this romantic drama from director George Tillman Jr.. The plot centers on the star-crossed love affair between a retired bull rider who wants to get back in the saddle, and an art student preparing to seek her fortune in New York City. As their relationship is put to the ultimate test, the wisdom of an aging man who recalls his own lost love serves as a source of great inspiration. Scott Eastwood, Britt Robertson, Jack Huston, and Alan Alda star. ~ Jason Buchanan, Rovi…”

The Review: I had low expectations going into this movie and figured it would be a very predictable and sappy Chick Flick, but I had to amuse Becky who had been waiting to see it.  I wasn’t a huge fan of The Notebook, it was good don’t get me wrong, but I didn’t think it was as great as everyone else thought it was.  I thought this movie was much better.  The Longest Ride has a great story, in fact it has a story within a story and it was a very well done.  It’s an entertaining love story that definitely kept our interest from start to finish.

The acting is really good and the characters were interesting.  The actors really fit the roles and they were believable.  The directing of the film was also well done.  Often times a film can have a good story, but if it is put together sloppy it’s not very entertaining to watch.  This was not the case with The Longest Ride that had several plot twists throughout the film.

Becky and I really liked this movie and thought it was definitely a Don’t Miss It. It’s a great date night film and you shouldn’t be disappointed if you go see it.