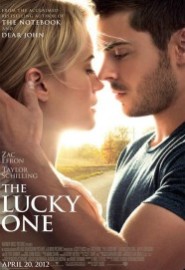 Becky and I went to see the movie, The Lucky One at the AMC Theaters in Castle Rock, CO a  week ago.  The MovieFone website at The Lucky One describes the movie as follows…

“Zac Efron stars as a soldier whose obsession with a photograph leads him on a lucky streak and unlikely romance. Scott Hicks directs the adaptation of Nicholas Sparks’ novel. Taylor Schilling co-stars….”

The Review
The Lucky One is a major chick flick starring Zac Efron and it’s written by the same guy who wrote The Notebook and Message In A Bottle.  If you remember how slow those movies were, this one is just as slow.  It moves really slow and the guy in the movie is way too perfect, so it’s completely ridiculous.

The story starts out pretty good with this Marine who survives his Tours in Iraq and Afghanistan when he finds a photo of a beautiful girl, only to have his buddies get killed.  He decides that if he makes it back from the battlefield that he’s going to track this woman down and thank her.  It turns out that he meets her and starts working for her, then becomes her Hero.

The movie has all kinds of problems with it.  It’s boring, it’s slow, it’s contrived and ridiculous.  The people in the film are good looking and have good chemistry, the acting is good, but there are plots within the plot, like the jealous ex-husband and their son who is a geek.  Then you have the ex-husband being a cop, only because his Daddy is the Mayor.  The movie is just kind of goofy.

I thought Becky would like it, but she didn’t either and thought it was dull.  It’s not often we agree with the Critics on films, but they got this one right.  It’s a rental at best and I would rate it a Don’t Bother.