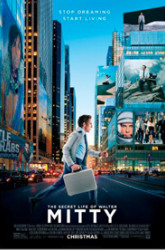 ‘‘Ben Stiller directs and stars in ‘The Secret Life of Walter Mitty,’ James Thurber’s classic story of a day-dreamer who escapes his anonymous life by disappearing into a world of fantasies filled with heroism, romance and action. When his job along with that of his co-worker (Kristen Wiig) are threatened, Walter takes action in the real world embarking on a global journey that turns into an adventure more extraordinary than anything he could have ever imagined.“

The Review: Becky and I were looking forward to seeing this movie and we didn’t know that it was Directed by Ben Stiller, while he starred in it as well.  We thought that the story is good, but it moves too slow at times.  There are plots within the main plot as it deals with the downsizing of the people at Life Magazine as it moves toward the digital age, along with the main character Walter Mitty trying to find love, while looking for a missing photo from a famous photographer for the final issue of Life.  I’m not sure if there was too much going on for it to move as slow as it did at times, but it’s a feel good film with no harsh language.  It’s a very clean and fun movie compared to some of the films that we have seen recently, which is a breath of fresh air.

It’s a bit like Forest Gump in that you have an oddball character, Walter Mitty, trying to find his way through life, while dealing with unique challenges that continue to come his way.  I really liked that he went around the globe trying to solve a problem, while meeting unique characters on his journey.  The constant day dreaming with annoying and I felt took away from the film.  I think it would have been better if he would have just “zoned out” without showing what he was dreaming about because it cheapened the film.  There were some really stupid parts of the movie, like a flash of him being Brad Pitt in Benjamin Button that could have been left out of the movie.  It was funny, but didn’t really add anything to the movie.

Ben Stiller does a great job of pulling his character off and the cinematography is fantastic.  However, it is far fetched and pretty ridiculous at times, but if you overlook the problems it’s a good film.  We all enjoyed it and thought it was worth the price of admission.