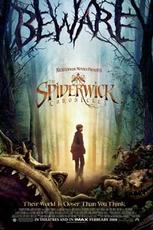 Becky and I took the kids to see The Spiderwick Chronicles

at the AMC theaters in Highlands Ranch, Colorado last night. The Fandango website at The Spiderwick Chronicles describes the movie as follows:

“Of the three Grace children, Jared (Freddie Highmore) has always been thought of as the troublemaker. So when strange things happen after his family’s move to a relative’s dilapidated estate, sister Mallory (Sarah Bolger), twin brother Simon and their mother assume that Jared is behind it all. However, magical creatures roam the grounds, and they all want a special book that Jared has found: a field guide to fantastic creatures, penned by Arthur Spiderwick.”

The Review
The Spiderwick Chronicles

is a great fantasy story about a family that moves into a house where strange things start happening. The young boy, who all the family members believe is a troubled child finds a book that opens up a secret world with goblins, ogres, trolls and other mythical characters.

This film is done extremely well. It was very entertaining and exciting with plenty of drama, action and suspense. Basically, this film has it all for a kid’s movie that will be fun for the whole family. Granted, we haven’t read the book series, so we were not disappointed to see parts of the books that may have been missing. I’m not sure if the book lovers will like the movie as much as the book, which is usually the case, but we really enjoyed this film.

However, our six year old Bianca, finished watching the movie and then turned to me in a sarcastic tone and said, “Nice job Dad, I’ll be having nightmares tonight about that big monster.” at which point I about died laughing. So, it may be inappropriate for real little kids, but she still liked it, along with her brother’s who loved it. We thought it was definitely worth seeing this one.