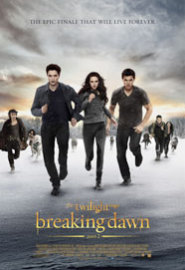 “The astonishing conclusion to the series, The Twilight Saga: Breaking Dawn Part 2, illuminates the secrets and mysteries of this spellbinding romantic epic that has entranced millions…”

The Review: The Twilight Saga: Breaking Dawn Part 2 is the conclusion to the popular Twilight Series from the popular teen books about a vampire and his prey that fall in love.  I’ve written reviews about the previous films that I thought pretty much sucked, except for the first one was somewhat interesting, but this one wasn’t much better than the others.  It was a little better in that it was the last one, but the whole premise of this story is totally ridiculous.

It’s the same cast of characters as the previous films, but now the two vampire lovers have had a child that is part human and part vampire, which makes absolutely no sense.  It apparently didn’t make any sense for the vampire leaders either, since they have assembled to destroy the child and the vampire parents, who have violated the vampire code of conduct.  If you’re still with me, you’re starting to see how stupid this whole thing is, but wait there’s more.  They have aroused other vampire clans to battle with them against the vampire leaders and their Werewolf friends have joined in this battle as well to save the half-breed vampire child.

Okay, I can’t write anymore about this movie.  It’s terrible.  If you’re a Twilight fan you will probably like it, but anyone else is probably going to see it as a total waste of time.  I believe Becky rated it a Rental, reluctantly, but I’m saying it’s a Don’t Bother for sure.  Fortunately, it was only $5 to watch this movie.