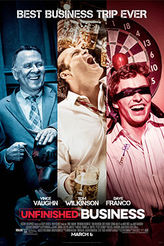 “Ken Scott’s comedy Unfinished Business stars Vince Vaughn as a struggling businessman trying to get his fledgling company off the ground. To do so he must travel with his partners (Dave Franco and Tom Wilkinson) on a foreign business trip in order to land a huge client. Unexpectedly, our hero discovers that he is competing against his former boss, and his attempts to show the prospective clients the best night of their lies leads to a number of unexpected complications. ~ Perry Seibert, Rovi”

The Review: There are some really bad comedies that I’ve seen over the years and this is one of the worst.  The film tries to be funny with some totally over the top homosexual scenes and a few other scenes that were just incredibly stupid.  Wayne’s World was a stupid comedy, but it was actually funny.  This movie was not funny.  They mixed very serious elements of this film, such as the main character’s son being teased for being fat and bullied at school with slapstick type comedy.

I’m not going to waste a great deal of time on this review.  The movie sucked.  I laughed a few times because it was so ridiculous I couldn’t believe it.  Becky didn’t like it and Hope hated it.  There were a few laughs in this movie, but overall it was raunchy and a waste of time and money.  It’s definitely a don’t bother.