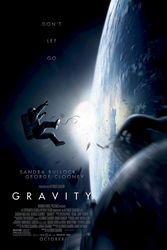 Becky and I went to see Gravity 3D this Weekend at the AMC Theater in Highlands Ranch, CO.  The Fandango website at Gravity 3D describes the movie as follows…

”Dr. Ryan Stone (Sandra Bullock) is a medical engineer on her first shuttle mission. Her commander is veteran astronaut Matt Kowalsky (George Clooney), helming his last flight before retirement. Then, on a routine space walk, disaster strikes — the shuttle is destroyed, leaving Ryan and Matt stranded in deep space with no link to Earth and no hope of rescue. As their fear turns to panic, they realize that the only way home may be to venture further into space…”

The Review:  Gravity 3D is a movie that is best to see in 3D because of the visual effects of the film.  What’s really fascinating is that it’s a movie with really only two actors for the entire movie.  When they said that it stars George Clooney and Sandra Bullock they were not kidding and it’s really more Sandra Bullock than anyone else as she tries to make her way back to Earth.

The story is pretty stressful, but it’s a pretty good story.  It shows what could happen if a satellite were destroyed by a country and it were to send the exploded parts into orbit that could take out a team of astronauts and other satellites who were in the same orbit.  It is a wild ride and if you like movies about Space you’ll like this film.  I think it cured me from any desire of ever being an astronaut seeing how fragile life is in outer space without tools.

Becky and I both thought it was okay, but we both said it was something you’re better off waiting for  to watch as a rental.  Unless, your aspirations are to become an astronaut, it was pretty boring other than the stress of seeing the main character trying to survive.  The odds of her making it were slim to none, so it was just a little too far fetched for me.  It reminded me of Castaway in outer space.