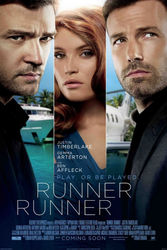 Becky and I went to see Runner Runner this Weekend at the AMC Theater in Castle Rock, CO.  The Fandango website at Runner Runner describes the movie as follows…

”Believing that he has been swindled, Princeton grad student Richie (Justin Timberlake) goes to Costa Rica to confront online-gambling tycoon Ivan Block (Ben Affleck). Block’s promises of immense wealth and power have a seductive effect on Richie, until he learns the shocking truth about his new mentor. When Richie is coerced by the FBI to help bring Block to justice, he faces the biggest gamble of his life: outmaneuvering the two forces closing in on him…”

The Review:  Runner Runner did not get great reviews from the movie critics, but many people who saw it seemed to like it.  We’re with the critics on this one though.

It stars Ben Affleck and Justin Timberlake in a story about a guy going to a prestigious college who is paying for his tuition using a gambling Affiliate Program.  How being a marketing Affiliate for an online gambling site makes you a good poker player is beyond me, but his Dad is also a professional gambler, which made more sense.

It was actually a good story, but it was too low budget of a film.  At times it felt like we were watching a made for television movie.  Quite a bit of the film didn’t make a great deal of sense and was kind of boring to watch and slow.  There are a couple twists and turns that kept our interest, but it’s not a really good movie.  The bad guy wasn’t bad enough to make you really want him to lose and the good guy wasn’t good enough to make you want to care a great deal about him either.

Becky and I both agreed on this one that at best it will make a good rental.