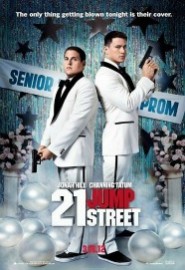 Becky and I went to see the movie, 21 Jump Street this Friday at the AMC Theaters in Castle Rock, CO.  The MovieFone website at 21 Jump Street describes the movie as follows…

” In the action-comedy ’21 Jump Street,’ Schmidt (Jonah Hill) and Jenko (Channing Tatum) are more than ready to leave their adolescent problems behind. Joining the police force and the secret Jump Street unit, they use their youthful appearances to go… “

The Review
21 Jump Street stars Jonah Hill and Channing Tatum, which is a rather odd partnership for a comedy.  Especially for Channing Tatum since he typically does more serious roles like Dear John and The Vow that he recently did with Rachel McAdams.

They are actually very funny together though in this movie and have good chemistry as friends with nothing really in common.  The characters are a crack-up together and they obviously had pretty good Screenwriters.  This movie has plenty of laughs, but it is definitely rated R for some of the crude humor, the language and some of the violence in the film.  Even the way they did the violence though was funny.

The biggest complaint about the movie is that is totally insane at times with the humor, but it’s still funny.   Channing’s character is a bit too stupid at the beginning of the film, to the level of being totally clueless, but this does make the film funny.  Jonah’s character is the super smart “nerd”, who was picked on in High School and when they go back he views it as a second chance.  The challenge for both of them is they are undercover cops now and the dynamics of High School have changed since they were there last.

Becky and I really liked this movie, but as I mentioned already be prepared for some crude humor at times and foul language, a bit like American Pie, if you’ve seen that film.  It delivered as a goofy comedy, but it’s not a film for everyone, so be forewarned that the bad language, some violence and crude humor may bother you, so you may want to pass on this movie.