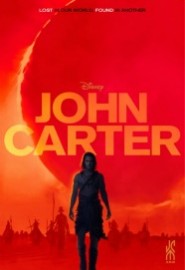 Becky and I went to see the movie, John Carter this weekend at the AMC Theaters in Castle Rock, CO.  The MovieFone website at John Carter describes the movie as follows…

The Review
John Carter is a new flick by Disney about a former Confederate soldier living in the late 1800’s, who gets transported to Mars while searching for gold and accidentally killing an alien being.  Once he’s on the Red Planet called Barsoom, he discovers that he’s in the middle of an alien civil war.  He also soon learns that gravity doesn’t have the same effect on him and he has what amounts to super human strength and the ability to jump great distance.

This movie had action from start to finish and two beautiful actors, but it’s a bit like a modern day Star Wars with the war and the aliens, the evil Empire, etc.  I half expected to see Darth Vader appear on the screen.  It had a pretty good story and was somewhat entertaining, but it was way too long.  Becky ended up falling asleep and she actually left the movie to go see part of the new Eddie Murphy movie, she disliked John Carter that much.

Becky didn’t like this movie at all and I thought it was pretty good, but not enough to rate it worth the trip, unless you’re a big time science fiction fan otherwise you may not like this movie.