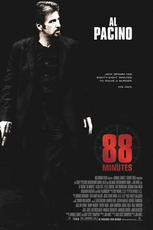 Becky and I went to see 88 Minutes at the AMC theaters in Littleton, Colorado last Friday. The Fandango website at 88 Minutes Fifty Pills divx describes the movie as follows:

“Al Pacino stars as Dr. Jack Gramm, a college professor who moonlights as a forensic psychiatrist for the FBI. When Gramm receives a death threat claiming he has only 88 minutes to live, he must use all his skills and training to narrow down the possible suspects, who include a disgruntled student, a jilted former lover, and a serial killer who is already on death row, before his time runs out.”

The Review
88 Minutes was a great flick with Al Pacino. It’s very intense, as you might suspect, since Al’s character is given 88 minutes to live. It’s very graphic as a psychological thriller, murder mystery and of course there are the token Hollywood lesbians in the film, so that we all get a glimpse into the emotional life of challenges facing the lesbian. They could have left that out, but the movie probably wouldn’t have gotten made otherwise.

Albino Farm buy Looking beyond those shortcomings the movie delivers as a suspense thriller and has plenty of excitement and thrills.

Al Pacino was okay in the film, even though he always over acts for his parts and was way to calm at certain parts of the movie for the crazy things going on in his life. It was a bit hard to believe, pretty far fetched at times, but we still liked it and thought it was worth the trip. It’s going to get mixed reviews, but if you like psycho thrillers you should like this flick.