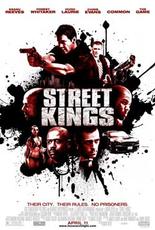 Becky and I went to see Street Kings at the AMC theaters in Littleton, Colorado last Friday. The Fandango website at Street Kings The Court Jester divx

“Tom Ludlow, a veteran LAPD Vice Detective, sets out on a quest to discover the killers of his former partner, Detective Terrance Washington. Captain Wander’s, Ludlow’s supervisor, duties include keeping him within the confines of the law–and out of the clutches of Internal Affairs Captain Biggs. Ludlow teams up with a young Robbery Homicide Detective to track Washington’s killers through the diverse communities of Los Angeles. Their determination pays off when the two detectives track down Washington’s murderers and confront them in an attempt to bring them to justice.”

The Review
Street Kings was a much better movie than we expected and that might be why we both liked it since we went into the movie with moderate expectations. The movie really delivered and the acting, directing and story was really good. Keanu Reeves was great in this flick and really embraced the part as a good cop in a very bad world who was continually being placed in compromising situations.

Forest Whitaker was good in the movie too, but the story saved the day for Street Kings. It was action packed, a bit nuts and makes you wonder if the inner city of Los Angeles is really as crazy as it is portrayed in this film. If it is as nuts as the film portrays then the Governor of California really has his work cut out for him because Los Angeles in this movie is out of control.

In spite of some of the potential holes in the plot, the continual violence and the insanity of some of the characters and situations, Street Kings is a great movie. We both really liked this movie and thought it was worth the trip.