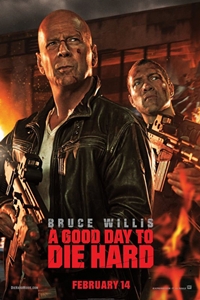 Becky and I went to see the new movie A Good Die To Die Hard at the AMC theaters in Castle Rock, CO on opening week.  The AMC Theaters website at A Good Day To Die Hard describes the movie as follows…

“Iconoclastic, take-no-prisoners cop John McClane, for the first time, finds himself on foreign soil after traveling to Moscow to help his wayward son Jack — unaware that Jack is really a highly-trained CIA operative out to stop a nuclear weapons heist. With the Russian underworld in pursuit, and battling a countdown to war, the two McClanes discover their opposing methods make them unstoppable heroes...”

The Review: A Good Day To Die Hard is another installment in the Bruce Willis Die Hard films that they tried to make believable by bringing his character’s son into the film, instead of making Bruce be the super hero cop like in the previous films – it didn’t work.  They just couldn’t help having Bruce Willis get beat up more than any James Bond character and walk away without having any broken bones or his son for that matter.  It was so ridiculous that I thought we had accidently stumbled into an Arnold Schwarzenegger or Sylvester Stalone action film from the 80’s.

Here’s a free tip for the Director of these type of action films.  If you throw your action hero into a plate glass window from a helicopter of a commercial building he is not going to go through it, roll around and start running to shoot more bad guys.  No, he’s simply going to bounce off and fall to his death.  In the unlikely event that he was miraculously able to shoot out the window first and make it through the heavy glass, when he hits that steal beam holding the window together in the middle that you had Bruce Willis break like a two-by-four, he’s going to just fall down on the ground and wait for the paramedics to arrive and hall him off to the hospital.

Becky and I just can’t take these ridiculous action films anymore.  We might as well have stayed home and watched the Road Runner and Wiley Coyote blow himself up and then come right back in the next scene.  At least cartoons have enough sense to make a joke out of it with the audience, but most of these action movies, are so far fetched now that it’s comical to watch and difficult to enjoy.

I think Becky fell asleep at one point in the film she was so bored.