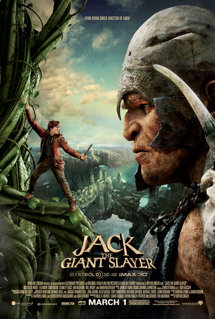 “An ancient war is reignited when a young farmhand unwittingly opens a gateway between our world and a fearsome race of giants. Unleashed on the Earth for the first time in centuries, the giants strive to reclaim the land they once lost, forcing the young man, Jack, into the battle of his life to stop them. Fighting for a kingdom, its people, and the love of a brave princess, he comes face to face with the unstoppable warriors he thought only existed in legend – and gets the chance to become a legend himself.

An ancient war is reignited when a young farmhand unwittingly opens a gateway between our world and a fearsome race of giants. Unleashed on the Earth…”

The Review:  Jack The Giant Slayer is a modern twist of the classic tale of Jack and the Beanstalk with his magic beans that grew into a giant beanstalk.  In this story, there isn’t a goose that lays golden eggs or a golden harp, but an army of giants living between Heaven and Earth, who are waiting to bring forth a rampage on the men who defeated them on a previous trip to Earth.

This is a goofy movie with some real problems.  Sometimes the giants are taller than trees and sometimes they are about as big as a stop sign, which created some serious consistency problems with the film.  The acting wasn’t very good and it switched from being a light hearted children’s movie to a comedy and a drama, so it was pretty much all over the place.  The story was fun and entertaining at times, but it also got a little dark with giants eating people and the villain murdering people, so it’s a bit of a whacky flick.

Becky hated this movie and so did Conroy and his buddy Lance.  Corban and I kind of liked it, but we were not over analyzing it, but watching it for the pure entertainment value of a odd movie about giants and a hero trying to score the princess.  It’s no Princess Bride for sure, but we didn’t think it was as bad and Becky and Conroy made it out to be.  Well, maybe it was, but we thought it was fun and goofy enough to enjoy it.  It’s definitely not for everyone and probably best left for the rental rack.