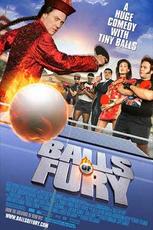 Becky and I went to see Balls of Fury last night at the AMC theaters in Littleton, Colorado. The Fandango website at Balls of Fury describes the movie as follows:

In the unsanctioned, underground, and unhinged world of extreme Ping-Pong, the competition is brutal and the stakes are deadly. Now, this outrageous new comedy serves up this secret world for the first time on-screen. Down-and-out former professional Ping-Pong phenom Randy Daytona (Tony Award winner Dan Fogler) is sucked into this maelstrom when FBI Agent Rodriguez (George Lopez) recruits him for a secret mission. Randy is determined to bounce back and recapture his former glory, and to smoke out his father’s (Robert Patrick) killer – one of the FBI’s Most Wanted, arch-fiend Feng (Academy Award winner Christopher Walken). But, after two decades out of the game, Randy can’t turn his life around and avenge his father’s murder without a team of his own. He calls upon the spiritual guidance of blind Ping-Pong sage and restaurateur Wong (James Hong), and the training expertise of Master Wong’s wildly sexy niece Maggie (Maggie Q).

Review
Balls of Fury is a goofy comedy that is pretty darn funny. We were going to go and see Death Sentence, but there was a guy who was taking movie reviews from people and everyone was giving it a D or an F for the amount of graphic violence, so we opted for this comedy. Balls of Fury is total nonsense, but it has plenty of laughs and reminded me of the 1970’s movie Airplane.

There are a few parts that are really hysterical, like when the little kid is competing in a ping pong tournament in the 1988 Olympics and it’s broadcast at 2:30AM and they show President Ronald Reagan and his wife Nancy watching the tournament. Who comes up with stuff like that?