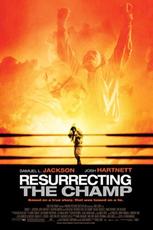 Things are not going well for Erik Kernan (Josh Hartnett). Erik, a sports reporter, is stuck covering the bush leagues because his editor (Alan Alda) thinks he cannot cut it as writer. On top of that, his marriage is disintegrating. One night, he rescues a homeless man (Samuel L. Jackson) and discovers the guy is Battling Bob Satterfield, a former boxer rumored to be dead. Erik sees a chance to give his career a much-needed boost by writing the athlete’s story.

Review
Resurrecting The Champ is a great movie that is based on a true story that brings the life of a washed up boxer living on the streets (Samuel L. Jackson) and a newspaper sports reporter (Josh Hartnett) who is about to be out of a job. It moves a little slow at times, but it’s an interesting film that brings the reality and challenges of a person living on the streets and the blows of life that drove him there.

This story is really amazing and it takes place in Denver, Colorado, which made it more enjoyable for us since we live in Colorado. It’s a very engrossing film that has a few twists and turns that we didn’t see coming. The acting by both Samuel and Josh is fantastic! They both give knockout performances and you can’t help but become a huge fan of both of these characters. We’re surprised it’s not doing as well at the box office as some of the other movies that are at the theaters right now because it’s definitely worth the trip without a doubt.

As you can tell, we both thought this movie was definitely worth the price of admission. If you’re looking for something to see at the movie theaters this week, make sure you go and see this film – you won’t be disappointed.