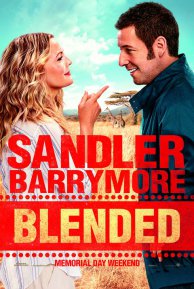 Becky and I went to see Blended last week at the AMC theaters in Castle Rock, CO last night.  The Moviefone website at Blended describes the movie as follows…

“Recently divorced mom Lauren (Drew Barrymore) and widowed dad Jim (Adam Sandler) let their friends push them into a blind date, which goes disastrously wrong. Unsurprisingly, neither wants to see the other ever again. However, fate intervenes when both Jim and Lauren, unbeknown to each other, purchase one-half of the same vacation package at a South African resort; they and their children are forced to share the same suite and participate in a slew of family activities together.”

The Review:  Blended is a typical Adam Sandler romantic comedy movie with a quirky far fetched story.  It has a bunch of cheesy situations and laughs and it is funny with a pretty good story, even though it is goofy.  The characters are pretty crazy like most of his films.  It’s fun to watch though and Drew Barrymore is her usual character as she plays the comedic straight man opposite Adam Sandler.

The movie is sometimes sad and sometimes is really funny, so it’s a bit of an emotional roller coaster throughout the film. It has a Brady Bunch theme to it since Drew’s character has two boys and Adam’s character has three girls and throughout the movie they are moving toward becoming a blended family, hence the name.  It makes a joke out of the complexity of blended families that is one of the reasons why it’s funny because of the dynamics that can take place in those situations.  It’s predictable, but it’s a pretty good movie for being an Adam Sandler movie.  It reminded me quite a bit of his film Just Go With It, but I thought this was a much better movie since it actually had some substance to it.  It isn’t a great movie, it isn’t a terrible movie, so it’s a good rental or date flick.  I didn’t mind sitting through it once it got going and it had some good laughs.

We both liked it and found it entertaining, but our expectations were not high going in and we are used to Adam Sandler movies.  We expected it to be terrible, so do not go into this movie with high expectations and you should like it.  Drew Barrymore saves the movie since Adam Sandler is primarily good at just delivering jokes and is always the same guy in everyone of his films.