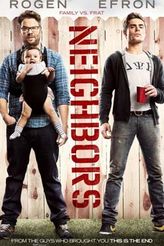 Becky and I went to see Neighbors a few weeks ago at the AMC theater in Castle Rock, CO.  The Fandango website at Neighbors describes the movie as follows… “An immature couple with a newborn infant go to war with the fraternity that turns their once-peaceful neighborhood into party central in this outrageous comedy of one-upsmanship. Restless thirtysomethings Mac (Seth Rogen) and Kelly Radner (Rose Byrne) are still clinging to the last vestiges of their youth as they attempt to adjust to the rigors of raising a newborn in their picturesque suburban starter home. When a massive moving truck pulls into the driveway next door, the bleary-eyed pair grow excited at the prospect of getting new neighbors. Unfortunately for Mac and Kelly, the new arrivals turn out to be the Delta Psi Beta fraternity.…“ The Review:  Becky and I thought the Previews for this movie looked really funny, so we decided to go and see it. Seth Rogan can be a hit or a miss with his movies and this was definitely more of a miss than a hit.  I know that it got pretty good movie reviews, but it’s extremely juvenile and probably great if you’re in High School and think that stupid humor and smoking dope is funny.  Almost all of the good laughs are in the Previews, so there isn’t much that is new in the actual film.  It does have some good laughs, but it’s no a really good comedy that you would want to see more than once. The story could have been really good, but the script wasn’t written very well.  The acting isn’t bad, but it’s just kind of a stupid movie.  The movie is really funny at times, but it was one of those movies where you walked out and said, “It was alright.”, so we’re going to call this a definite rental. John – ** Rental Becky – ** Rental Sponsored By: SHAREMERCHANT.com:  Get paid to share!  Find out how you can earn $1,500 a month using and recommending products with a low cost business.  Become a Share Merchant! Click here!

Auto Consultant – John Boyd: The Cool Car Guy John is an auto consultant and owner of CoolCarGuy.com with his license at a car dealership in Denver, Colorado. He can help you save time and money on any make or model, new or used, lease or purchase or consign your vehicle – nationwide! Call or email John about your next vehicle! jboyd@coolcarguy.com or Twitter@coolcarguy