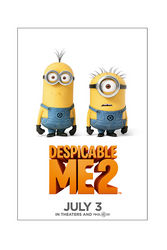 Becky and I went to see Despicable Me 2 a couple of weeks ago at the Regal Cinemas in Lone Tree, CO with our kids.  The Fandango website at Despicable Me 2 describes the movie as follows…

”Now that Gru (Steve Carell) has forsaken a life of crime to raise Margo, Agnes and Edith, he’s trying to figure out how to provide for his new family. As he struggles with his responsibilities as a father, the Anti-Villain League — an organization dedicated to fighting evil — comes calling. The AVL sends Gru on a mission to capture the perpetrator of a spectacular heist, for who would be better than the world’s greatest ex-villain to capture the individual who seeks to usurp his power…”

The Review:  Despicable Me 2 is the second installment of the Despicable Me characters that were hilarious the first time around.  This time it’s just as funny as before only with a completely different story that works really well for the characters.  There are some really great cartoons that have come out over the years, ever since Shrek started this type of new animation, with characters that are far more life like than the Bugs Bunny type characters we grew up with as kids.  Many of these films are better than many of the big budget movies that Hollywood puts out on the market with live actors.

The story of Despicable Me 2 is pretty funny and I love these characters, especially the Minions, who are a crack-up.  The character Gru is really funny, Steve Carell does a great job with him and his Gru’s girlfriend in this movie is hilarious and a good fit for the film.

If you’ve never seen Despicable Me, you should rent it and watch it first and then go see this movie.  It will make it much more enjoyable and this is definitely one of the movies you should take your children to go see or your grand children. If for some reason you didn’t like the first one, which I can’t imagine how you wouldn’t, then you should skip this one since it’s pretty much the same characters as before in a different situation.

We all liked it and rated it a Don’t Miss It.  It’s definitely worth the price of admission.