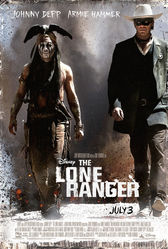 Becky and I went to see The Lone Ranger on opening night at the AMC Theater in Castle Rock, CO with our kids and our friends Chris and Hope.  The Fandango website at The Lone Ranger describes the movie as follows…

”The Lone Ranger rides again with this big-budget Walt Disney Pictures production starring Johnny Depp as Tonto and Armie Hammer as the famed gunman. The story centers on Tonto’s recollection of the adventures that found lawman John Reid transformed into The Lone Ranger, legendary hero of the Old West…”

The Review:  The Lone Ranger is a character who I grew up watching as a kid on television.  It was usually on after Gilligan’s Island or Bewitched, so I understand Tonto and The Lone Ranger characters.  After all, “Even The Lone Ranger had Tonto.” is something that we often hear about how you need other people in your life.  However, this version was a bit strange.  Tonto is played by Johnny Depp and I’ll just come out and say that he sucks in this movie.  He’s actually pretty good as the “old” Tonto, who is telling the story of The Lone Ranger to a kid wearing a mask in 1933, but during the main scenes of the film, you think you’re watching Captain Jack Sparrow dressed up like an Indian.  His character made absolutely zero sense and he and The Lone Ranger do not really like each other for a good part of the film since The Lone Ranger is the evil white man.

The story isn’t very good and the movie is way too long.  The Lone Ranger goes from being a guy who refuses to shoot a gun to suddenly being a sharp shooter the minute he puts on the mask.  This made absolutely no sense whatsoever and too much of this movie didn’t make any sense, like the Earth being out of balance and flesh eating rabbits?  It was all over the place at times and a bit whacky.  The movie was filmed in Colorado, New Mexico and Arizona I believe, so the scenery is great.  There is quite a bit of senseless violence, including the main villain eating a guy’s heart that made no sense again in this film.

The movie isn’t terrible, but it’s not great either and it definitely is not The Lone Ranger that I remember as a kid.  Instead it’s some crazy character that the whacko department at Disney dreamed up.  A friend of ours, who we go to movies with quite a bit is in the film as an “extra”, but there are so many extras in this movie that we were unable to spot him during the film.  We’ll have to try again when it comes out on DVD and fast forward through the film looking for him because I don’t know if it’s worth watching a second time.

Corban and Bianca went with us and they thought it was Worth The Trip.  Becky and I are going to have to go with Rental on this one though since it was somewhere between being a rental and worth the price of admission.  Chris and Hope didn’t love it either, but thought it was “alright”, so that speaks rental to me.