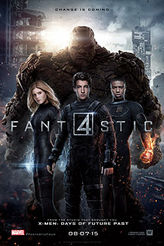 I went to see the new movie Fantastic Four at the AMC Theater in Castle Rock, CO with Conroy and Corban last night.  The Fandango website at Fantastic Four describes the movie as follows…

“Brilliant scientist Reed Richards builds a device that allows users to teleport to an alternate dimension, but an experiment involving it goes wrong and leaves him and his three teammates with unusual superpowers. The quartet are then forced to work together to battle an enemy from their past…”

The Review:  The first Fantastic Four movie really sucked and this one we thought would be better.  Unfortunately it wasn’t, but for different reasons.  The story was actually really good and the acting was good, but the problem was how they put the film together.  It was actually a really great movie for the first half of the film, but then things fell apart.

They built up this really cool story and the next thing you know they threw the audience into this strange situation between the main characters and the evil character Doom.  They didn’t build it up to a major fight scene between the super hero’s and the villain.  The fight scene lasted about 10 minutes or less and it was really ridiculous.  It was as though they had to keep the movie to 90 minutes and they just got in a hurry to finish the film, which really wrecked it for everyone.  People leaving the movie had the same comments.  Needless to say, we were all disappointed because the ending was such an incredible let down.  Which is why we are suggesting you wait for the rental for this one.