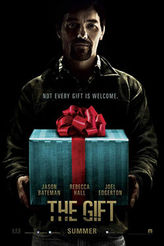 Becky and I went to see the new movie The Gift at the AMC Theater in Castle Rock, CO with Corban and her Mom.  The Fandango website at The Gift describes the movie as follows…

“Written and directed by Joel Edgerton, The Gift centers around a young married couple Simon (Jason Bateman) and Robyn (Rebecca Hall). Simon has a chance encounter with a former acquaintance, the off-kilter Gordo (Edgerton), who begins to surprise the couple with unwanted and increasingly menacing gifts. Eventually, Gordo also reveals a hidden secret from Simon’s past and throws the couple’s lives into a tailspin…”

The Review:  Becky and I are always big fans of thrillers, especially crazy movies like Gone Girl.  We expected something like that with The Gift, especially based on the previews of the movie.  It was pretty well done.  The acting was good, the story was pretty good and the directing was good, but it wasn’t very scary or overly thrilling.  It isn’t a terrible film, but it was over-the-top excellent as expected.

The movie is about a couple that has moved to California to get a new job and while shopping runs into an old schoolmate from High School, named “Gordo” as a nickname.  It turns out the two have really negative history and the main character is trying to keep it a secret from his wife.  Gordo keeps bringing the two of them gifts and getting close to the wife of his hostile friend from days gone by.  The movie gets a bit exciting as you start to learn about their past and the present.   It escalates into a serious conflict between all of the parties.

I liked the movie more than Becky, Corban and Betty did.  There are some disturbing aspects of the film with what happens to some of the characters, but I thought it was Worth The Trip.