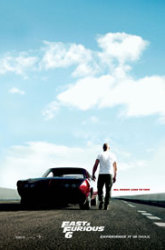 Becky and I went to see Fast & Furious 6 last Weekend at the AMC Theater in Highlands Ranch, CO with our friends Mark and Maria. The MovieFone website at Fast & Furious 6 describes the movie as follows…

“Since Dom (Diesel) and Brian’s (Walker) Rio heist toppled a kingpin’s empire and left their crew with $100 million, our heroes have scattered across the globe. But their inability to return home and living forever on the lam have left their lives incomplete.

Meanwhile, Hobbs (Johnson) has been tracking an organization of lethally skilled mercenary drivers across 12 countries, whose mastermind (Evans) is aided by a ruthless second-in-command revealed to be the love Dom thought was dead, Letty (Rodriguez). The only way to stop the criminal outfit is to outmatch them at street level, so Hobbs asks Dom to assemble his elite team in London. Payment? Full pardons for all of them so they can return home and make their families whole again….”

The Review:  It’s a repeat of every other Fast & Furious movie and it’s incredible that they have been able to make six of these movies.  This is a 100% pure guy flick.  It’s mindless, ridiculous, far-fetched, unbelievable, should I keep going?  It’s still a fun action movie with fast hot cars and beautiful women, but the story is really laughable and the main characters are pretty much indestructible with The Rock looking like he eats steroids for all three meals.  All I can say is, “that’s not natural or normal”.  At one point toward the end, his head looked like it was two of Vin Diesels.

Becky and Maria didn’t like this movie at all and thought it was a complete waste of time.  I liked it for the action and fast cars and Mark liked it for the action and the hot women.  Although I hate seeing them destroy so many great cars, which is like a horror movie for me and at times this movie plays out like a horror movie, especially a crazy scene with a tank rolling over cars on a freeway.  The characters were also totally ridiculous at times, more like super hero’s than real people.  You definitely have to look past the absurdity of the film and get ready for the 7th because that’s coming for sure.

If you like these movies, you’ll probably like this one.  If you don’t than go with Becky’s advice and skip it.