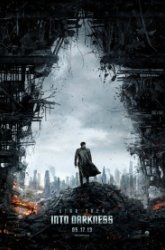 “The Star Trek franchise continues with this follow-up to 2009’s J.J. Abrams-directed reboot. Abrams returns to direct from a script by Damon Lindelof and the writing team of Roberto Orci and Alex Kurtzman. The crew of the Enterprise engages in an epic battle of good versus evil after being summoned home, only to discover Starfleet in ruins, and they venture into a war zone to find the powerful villain (Sherlock’s Benedict Cumberbatch) responsible for the devastation…”

The movie has a bit of a Soap Opera feel to it, more like the television series and it had plenty of action.  It’s a fun movie to watch, but I thought the first one was much better and Becky got bored with it, since she’s not a science fiction, Star Trek fan anyway.  Still, this movie is much better than the older versions that they had done previously that were pretty lame and the characters are great, true to the original, such as the classic “Dammit Jim, I’m a Doctor…” line by Bones in this new movie.  There are a number of things like this that are pretty cool to the Star Trek fan.  I watched the television series growing up, so I caught it quickly, along with many other people in the audience.

We liked the movie and thought it was the price of admission, especially if you’re a Star Trek fan, but I have to say it was just Worth The Trip and not a Don’t Miss It.  Becky agreed with me on this one, which is “highly unusual”.