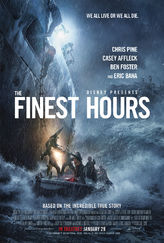 Becky and I went to see the new movie Finest Hours at the AMC Theater in Highlands Ranch, CO last week. The Fandango website at Finest Hours describes the movie as follows…

“This docudrama depicts the incredible true story of a daring Coast Guard rescue operation off of Cape Cod during a ferocious storm in the winter of 1952. When an oil tanker splits in half, trapping its crew aboard the sinking vessel, four brave Guardsmen set out to save them. Craig Gillespie directed this adventure drama, which stars Chris Pine, Ben Foster, and Eric Bana..”

The Review:  The Finest Hours is the story of the most daring Coast Guard rescue operation in history during a monster winter storm of 1952 in a small boat in giant waves.  Becky and I had the opportunity to watch a 9News report here in Denver featuring the remaining survivor who was involved in this rescue and this story is really incredible.

The movie is great because the story is great and it shows the true grit of some of our older generations, who would put their lives on the line to save others.  There is a line in the film where Chris Pine’s character basically says that the Coast Guard tells their people that they have to go out, but it doesn’t say that they have to come back in.  That was a pretty amazing statement about the character of the men and women who serve in the United States Coast Guard and our Military because it’s true.

What these men did was exactly that and went into an impossible situation when others would have figured out a way to save their own skin and all the men on that oil tanker would have died.  The survivor interviewed on the 9News story pointed out that many of the men who were saved got married and went on to have families.  Those people wouldn’t have been born and lived had these men not been willing to put their lives on the line.  When you see this movie it will make you wonder how these people could have possibly survived.  It’s a fantastic story of American heroism.

Becky and I both really liked this movie and though it was a Don’t Miss It and Worth The Trip.