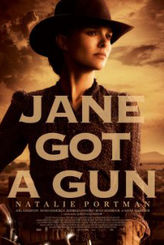 Becky and I went to see the new movie Jane Got a Gun at the AMC Theater in Castle Rock, CO on opening day. The Fandango website at Jane Got a Gun describes the movie as follows…

The Review:  Jane Got a Gun is a classic Western starring Natalie Portman as a woman who is living in a society where women are clearly second class citizens.  Her character has lived a life of hardship after her true love has gone off to war and left her alone to fend for herself.  She has a daughter and before you know it she is in a world where a beautiful woman can be used and abused by men.  Her character is continually in a desperate situation throughout the film as an outlaw gan is trying to hunt her and her husband down.

It’s a strange flick and it’s hard to watch at times because this woman’s life is pretty miserable as she settles time and again striving for that early American dream.  The movie will definitely make you appreciate living in America today with our modern conveniences, but it didn’t really do much for Becky or me beyond that since it moved pretty slow.

The movie has her character in very challenging situations and at times it is disturbing since you could see where it could be true to life in the Old West.  It made me think that life really sucked back in those days.  It is getting good reviews, but it was just a little too boring for too much of the film.  I guess we had higher expectations than what it delivered, so we are rating this one a rental.