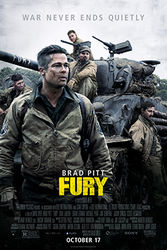 Becky and I went to see the film Fury at the AMC Theater in Highlands Ranch, CO.  The MSN Movie website at Fury describes the movie as follows…

“In this thundering war thriller set during the Allies’ final push into Europe in April 1945, a battle-weary Army sergeant leads a Sherman tank and its crew on a deadly mission behind enemy lines…”

The Review: Fury is just incredible movie making.  The acting is fantastic, the story is as real as you can get and it is a reminder of the price that men and women paid fighting the Germans in World War II to defeat the Nazi regime.  It is brutal and does not candy coat death, destruction and war like so many films tend to do.  There are parts of this movie that are very disturbing and that will make you think, including an execution of a man pleading for his life.  The movie illustrates how war makes people hard and able to commit murder given the circumstances, even if they don’t think that they will.

Fury reminded me of Saving Private Ryan in that it is one of those movies that you have to see, but I don’t have any interest in seeing it again.  It was very well done, even if you’re not a fan or war movies you should like this film and we definitely rated it a Don’t Miss It.