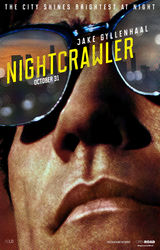 Becky and I went to see the film Nightcrawler last night at the AMC theaters in Highlands Ranch, CO with our friends Mark and Maria.  The Fandango website at Nightcrawler describes the movie as follows…

“An ambitious young crime journalist probes the dark underbelly of L.A. in this cynical urban drama that marks the feature directorial debut of screenwriter Dan Gilroy (Real Steal, The Bourne Legacy). Lou Bloom (Jake Gyllenhall) is a petty thief in search of a payday when he stumbles onto the scene of a grisly car accident, and witnesses seasoned “Nightcrawler” Joe Loder (Bill Paxton) gathering video footage for a local news broadcast. Convinced that this is a career he could excel at, Lou promptly purchases a police scanner and a cheap video camera, and hits the streets. In short order Lou has hired an assistant (Riz Ahmed) to help him navigate the city streets, and started selling footage to local TV producer Nina (Rene Russo), one of Joe’s regular buyers. As fast learner with an eye for detail, Lou isn’t above manipulating a crime scene in order to get a picture that tells a story…”

The Review:  Let me start by saying that Mark fell asleep within the first ten minutes of the start of this movie and thought it was boring.  Maria fell asleep a couple of times and so did Becky, so that pretty much left me to actually watch the film from start until finish.  And this movie is a trip.  Jake Gyllenhaal is amazing in this movie.  His character is psychotic and even says at one time in the film how he doesn’t like people.  The way that his character goes from being out of a job to controlling people in various situations is wild and extremely well done.  You will believe that this character could really pull off what he does in this movie and I think that’s what makes it such a good film.

I don’t think this movie will be for everyone.  Obviously, the three people I was with didn’t really get into it and thought it was “boring”, but I found it very entertaining and fascinating.  The acting was great and the situations and characters in the movie with a glimpse into network news channels was excellent.  Be forewarned though that the content is disturbing and graphic and the main character is close to being a serial killer as you can get without actually directly wielding the weapon.

I think it was worth the trip to the movies, but Becky definitely disagreed.