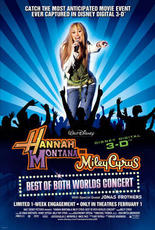 at the AMC theater in Highlands Ranch, Colorado on Saturday night. It’s $15 a ticket to get into this show, so be prepared to spend some money. The Fandango website at Hannah Montana 3D describes the movie as follows:

“Hannah Montana fans everywhere will have a chance to see their favorite singer, songwriter and actress, Miley Cyrus, perform her sold-out concert tour on the big screen in HANNAH MONTANA & MILEY CYRUS: BEST OF BOTH WORLDS CONCERT. Shot during Cyrus’s 54-city tour and exhibited in state-of-the-art Disney Digital 3D™, the film will be coming to theaters for a special one week engagement on February 1, 2008.”

The Review
Hannah Montana & Miley Cyrus 3D is a huge hit around the country and apparently in Denver as well, since they extended the show an additional week. It’s extremely well done, the 3D was as good if not better than some of the rides at Disney World in 3D and Disney definitely has a cash cow with Miley Cyrus.

Bianca absolutely loved this concert and the theater was packed with Moms and Dad’s like me taking their daughters to this unique movie. I don’t think I saw too many little boys, our son Corban who is 8 had no interest in going and unless your child is a Hannah Montana fan, they may not like it that much. The Jonas Brothers, I had no idea who they were, but Bianca did, were part of the show for a while. It’s just like a concert with some backstage insight into how they put the concerts together and made this movie.

It was entertaining, the music was good and the kids all loved it. Bianca thought it was definitely a Don’t Miss It and I thought it was Worth The Trip, if you have a 6 year old daughter who is a big fan of the television show.

John is an auto consultant with JFR & Associates Sniper 2 release in Denver, Colorado. He can help you save time and money on any make or model, new or used, lease or purchase – nationwide! Call or email John about your next vehicle! jboyd@coolcarguy.com

Every Monday – Thursday 10AM – 11AM MST on CastleRockRadio.com