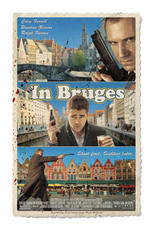 Becky and I went to see In Bruges at the Landmark Esquire theater in Denver, Colorado on Friday night. The Fandango website at In Bruges describes the movie as follows:

“Bruges (pronounced “broozh”), the most well-preserved medieval city in the whole of Belgium, is a welcoming destination for travellers from all over the world. But for hit men Ray (Colin Farrell) and Ken (Brendan Gleeson), it could be their final destination; a difficult job has resulted in the pair being ordered right before Christmas by their London boss Harry (two-time Academy Award nominee Ralph Fiennes) to go and cool their heels in the storybook Flemish city for a couple of weeks. Ken and Ray’s vacation becomes a life-and-death struggle of darkly comic proportions and surprisingly emotional consequences.”

The Review
In Bruges

made us feel like Colin Farrells character Ray felt about being in Bruges for the entire movie. We couldn’t wait to get out of this movie. The best way to describe this movie is why it received the rated R rating, it’s loaded with strong bloody violence, pervasive language and some drug use. That’s the entire movie. There is nothing else here. There is some witty dialogue between the two hit men and some of the other characters in the story, but beyond that it’s stupid.

Non-stop F bombs and bad language from the opening scene to the last, strong bloody violence just like the description tells you and some drug use with a midget. The acting was good, the script was ridiculous and the movie overall was terrible. Neither of us thought it was worth the price of admission. It might make a good rental for fans of Pulp Fiction, since it’s designed for people with the same mentality, but beyond that it’s definitely not worth your time.