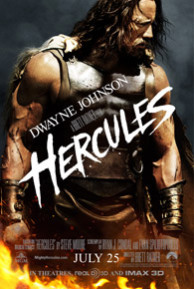 Curban and I went to see the new movie Hercules at the AMC Theater in Castle Rock, CO earlier this week. The MovieFone website at Hercules describes the movie as follows…

‘‘Though he is famous across the ancient world for his larger-than-life exploits, Hercules (Dwayne Johnson), the son of Zeus and a human woman, is haunted by his tragic past. Now, he fights only for gold as a traveling mercenary, accompanied by a band of loyal followers, including Amphiarus (Ian McShane) and Autolycus (Rufus Sewell). However, when the benevolent ruler of Thrace and his daughter seek his help in defeating a savage warlord, Hercules must find the true hero within himself once again.“

The Review:  I met Corban to go and see this new movie Hercules and we went into it with pretty low expectations.  The film delivered as expected.  It was really predictable and boring at times and reminded us of something we would have watched on television.  The story was much better than the original and more believable since Hercules was just a strong guy with a team of people who helped him become the famous Son of Zeus.

There are a few plot twists throughout the movie and it is entertaining at times, but it was a bit too much like Arnold’s Conan the Barbarian back in the late 1980’s with a guy with big muscles running around.  The acting isn’t the best, but it’s one of those films that will make a good renal.  It’s between being a rental and being worth the price of admission, but it kind of lost Corban and I for the most part since it was just too much of the same thing we’ve seen done before.

If you’re a big Dwayne Johnson fan you’ll probably like this movie more than we did.  Otherwise this is a movie that is best to be watched as a rental.